Demanding targets in the area of daylight and building physics at the new adidas headquarters in Herzogenaurach, Germany

Throw the old overboard and dare to try the new - this was the premise under which Bartenbach Lighting Design successfully implemented the desire for daylight-exposed workplaces and a multifunctional entrance area in the new adidas headquarters in Herzogenaurach.

Fulfilling challenging goals of daylight and building physics with low-tech means, throwing the old overboard and daring the new. At adidas, this has been impressively achieved in the new headquarters in Herzogenaurach. Daylight requirements and building-physics requirements are sometimes difficult to reconcile. Ever more voluminous supporting structures reduce the incidence of sunlight and ever larger window areas require complex shading to prevent overheating in the building. The additional desire of adidas to keep the effort and cost of maintaining sun protection systems as low as possible was a particular challenge.

The team, consisting of Behnisch Architects, Transsolar and Bartenbach, developed a fixed facade solar shading system according to parametrically defined objectives, which covers all requirements as a matter of course. Due to the partially perforated diamonds, which are shifted according to the direction of the compass, all façade orientations are equally important for the employees in terms of visibility, shading and lighting. This gives adidas maximum flexibility in room planning. The sunlight from the fixed slats, is shaded in such a way that no overheating occurs and at the same time a sufficient amount of daylight is directed into the room. The exact size and arrangement of the mesh netting on the façade creates the greatest possible transparency for the employees in order to ensure a constant view over a very large area. The elements are perforated in such a way that transparency is also created in the panels themselves and there is no sign cap effect.

The artificial light is designed with almost the same consistency. By means of a uniform lighting system, all large areas of the development/ corridors, offices up to the entrance arena are solved. The integration of artificial light serves not only the banal fulfilment of norm values but also makes the DNA and identity of adidas clear. In addition, the artificial light also contributes to clear routing and orientation and is reflected in the design aspects. Through the interaction of light, material and interior design, it has been possible, despite using a simple grid lighting system, to structure the massive surface and translate it into a human scale. The louvre luminaires are installed, suspended and assembled in different ways. Simple graphic structural ceilings give the room a clear picture of what is meant by it, because ceiling elements are deliberately placed in the cones of light.

In the entrance arena, the enormous width of the entrance has been structured and optically reduced with a sharp change of material. This creates a clear separation of visitor zones and employee zones, purely due to material changes, without building a physical separation. With grey and black, neutral colours are deliberately chosen in order to leave room for future uses, whether for fashion shows, product presentations or other events. Colour is defined by the adidas brand and human perception. In order to reduce the threshold from outside to inside, only "tunable white" luminaires with the same lighting solution as in the interior are used in the entrance area. This creates a harmonious transition from daylight on the outside to daylight on the inside of the magistral hall and a cozy atmosphere at night for individual event types. This makes the entrance multifunctional and the area can be used for any lighting mood depending on the situation. 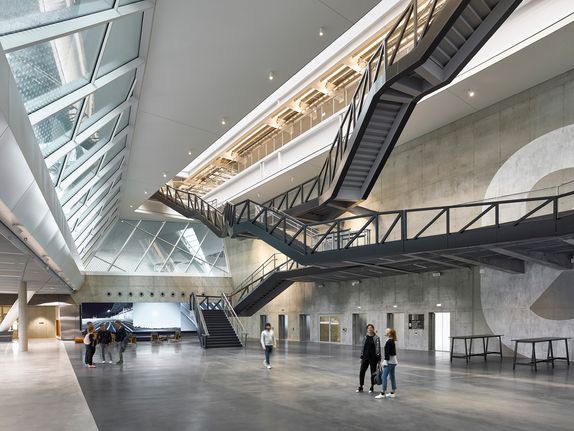 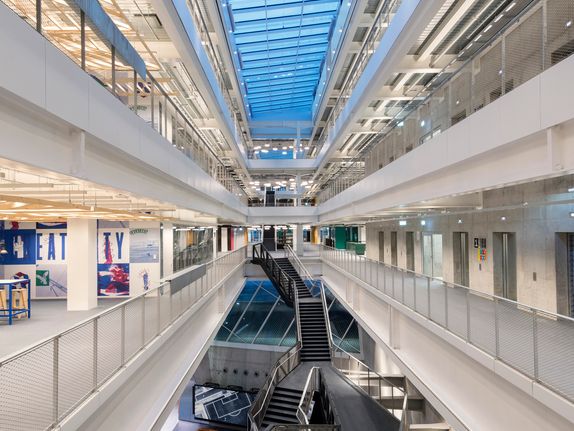 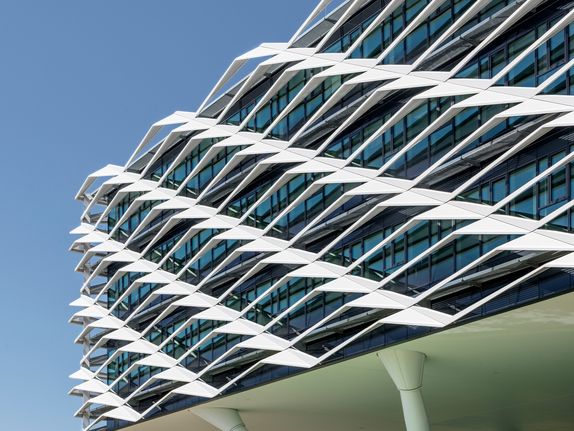